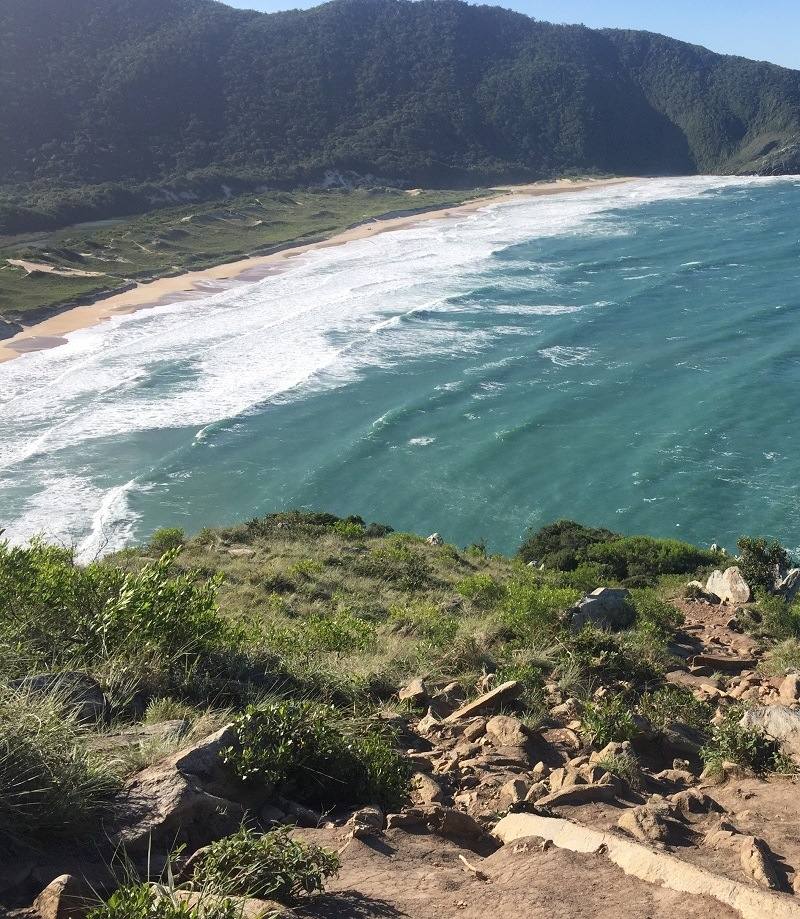 Lagoinha do Leste and Morro da Coroa in Florianopolis

In today's article, we'll talk about a paradise, almost hidden in Florianópolis. For those who like to take a good trail, one of the most famous in the city, take the fantastic trail to Lagoinha do Leste, which is in the south of the island.

The trail can be performed by two inputs.

First entry: Rua Manoel, on the beach of Pântano Sul

I start a little sloping, but it's all "paved" until it reaches the beginning of the trail, where there are signs that indicate some information about the route, such as the distance, which is 2 km and 200 m, the level of difficulty and how much time on average, it takes to do this stretch – the time on board is 50 minutes.

The trail is considered moderate level, as it has a lot of climb at the beginning. After all the climb, obviously the descent is the most enjoyable part of the trail, but you have to be careful on some routes where you go up a lot and then go down steeply. Although moderate, it is necessary to have a lot of strength in the legs.

The trail is still very well marked, has several wooden “stairs” and the stones themselves form a kind of “asphalted” path. These points are considered, relatively easy, but you need, of course, to have a minimum of physical conditioning and some strength in the lower limbs to get to the beach.

There is a second path that leaves Praia do Matadeiro, passing through the closed mountain range and ending up on the opposite side of the southern marsh trail. It is a trail that has a longer flat path, and passes along the Costão side - views to the sea almost all the time, in an open section -, but it is longer, having almost 4 km in length, making it so a moderate level walk, where it is possible to do it in up to 3 hours, more or less.

A very nice idea is to walk to one of the entrances and, after enjoying the whole day, make the way back along the other trail, aiming to make the most of this wonderful place.

The entire trail to reach the Corona Hill is made up of steeper climbs and rocky soil. This trail is considered, yes, of difficult level, as it forces you to the limit and is very steep, having several climbs, almost climbs, in a soil where the stones are very irregular; so you need to be much more careful, much more willing, but you can certainly say that the view from above pays off, pays off and a lot.

In terms of the track itself, it doesn't have any marks at all, but it's pretty intuitive. It has a path marked with earth, where it is possible to see many marks of the sole, foot and among other signs that indicate the path.

It's normal to see people giving up on the way because they can't find the end of the trail, as you go up a lot - and keep going up - and it doesn't "never arrive", but there are indications that the end of the path is near when you can already see some "crown" stones.

Uniting the landscapes of beach, river and mountains.

From the top of the Corona Hill, it is possible to observe and have a dimension of the natural beauty that is the place. It is possible to see the “lagoinha do east” flowing into the sea, the immense mountains of natural vegetation and, of course, the entire immensity of the Atlantic sea.

The photos taken, both on the way up the Corona Hill, and on its top, are always stunning and chilling. Aided by an incredible view, the trail takes your breath away at all times, whether because of the challenges to follow or the wonders of nature, so it's only fair that when you return to the beach, before leaving, take a dip in the sea.